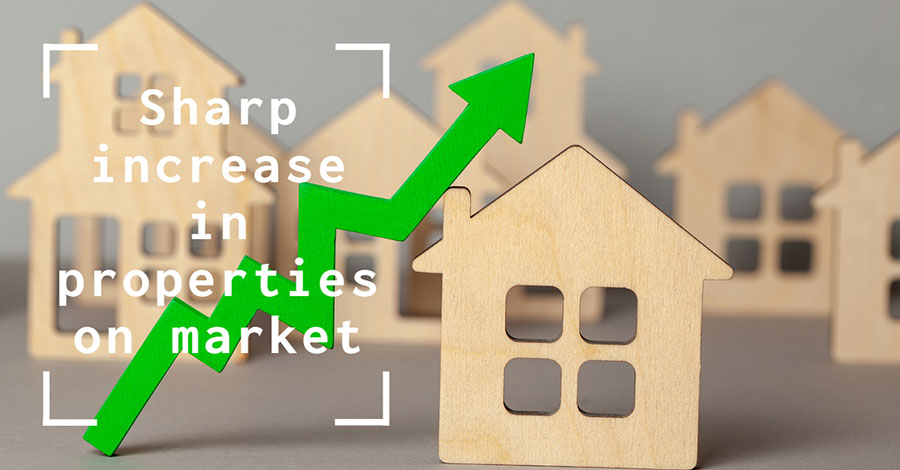 Sharp increase in properties on market in January

Research conducted by Propertymark has revealed that the number of homes put on the market in January rose dramatically after three months of declining figures.

Looking at its own branches, Propertymark said that new instructions per branch were up from 5 to 9. The number of potential buyers registering was double that in December, after having fallen by 28% over the last quarter of 2021.

Despite the end of the Stamp Duty break, which many thought might calm the housing market, those wishing to move house are still facing a battle to secure a new home.

While the cost of property is at a record high, with prices up 7.6% this January compared with one year ago according to Rightmove, buyers are still happy to offer more than the asking price. Some 37% of properties sold above their asking price in January, higher than the December figure of 25% and the figure for the previous January of 9%.

This means that the increase in homes for sale is very welcome. Propertymark’s CEO, Nathan Emerson, said: “Latest Housing Market Report paints the positive picture that our member agents have been hoping for, which is the much-needed increase in the number of properties coming to the market.

There is certainly no let-up in demand, but the supply line appears to be recovering at a quicker pace and edging towards a rebalancing of the market.

This is welcome news on the back of stock levels that had declined to record lows throughout last year against the backdrop of escalating demand.

Our figures coupled with those published elsewhere do also point to a slight cooling in house price rises.

But we remain in a strong sellers’ market and anyone thinking about selling should act now with confidence as we head towards spring which is traditionally a busy time.”

According to Nationwide, the cost of a typical home in the UK rose by a record £29,162 in 2021, the biggest increase the lender had seen since it started collecting data in 1991.

This meant that the average house price in February stood at £260,230. Nationwide data showed a 12.6% increase in property prices in the year to the end of February.

The price of a typical home was 20% higher than two years ago, before the pandemic, which equated to a price rise of £44,000.

Nationwide’s chief economist Robert Gardner said: “The continued buoyancy of the housing market is a little surprising, given the mounting pressure on household budgets from rising inflation, which reached a 30-year high of 5.5% in January, and since borrowing costs have started to move up from all-time lows in recent months.”

Despite continuing uncertainty, moving house seems set to remain a goal for many following the pandemic.

If you are thinking of buying or selling your home and you would like to speak to one of our expert property lawyers, ring us on 0333 305 5189 or email us at info@lpropertylawyers.co.uk

Should you extend your home or move house?

Is it a good idea to raffle your house?